Big Cats at Buffalo Zoo Have Something to ROAR About 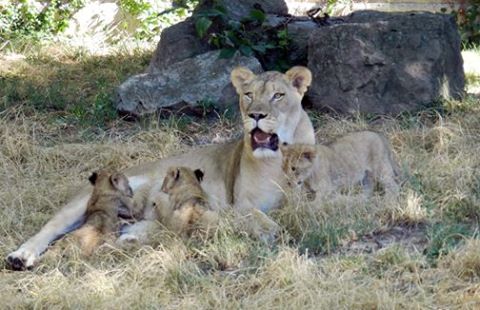 BUFFALO, N.Y., Aug. 8, 2016 /PRNewswire/ — ROAR Logistics Inc., recently signed on as the title sponsor of the Big Cats Exhibit at the Buffalo Zoo, giving three new lion cubs and the entire pride something to “ROAR” about. The sponsorship also gave company president, Robert Rich III, the opportunity to name the litter’s only male cub. On Saturday, Rich and Buffalo Zoo officials, announced the sponsorship and introduced Roary and his sisters, Asha and Amirah, to droves of eager onlookers.

“ROAR Logistics is proud to sponsor the Big Cats exhibit; we believe linking our name to these majestic cats brings attention to the Zoo’s remarkable education and conservation efforts,” said Rich. “By introducing these beautiful animals to new generations of zoo visitors, we hope to ensure that these animals not only thrive locally, but also in their natural habitats.”

As part of the sponsorship agreement, Rich was given the opportunity to sponsor the naming of Roary, born on May 12, 2016, to parents Lusaka and Tiberius. Roary’s sisters, Asha and Amirah, were named by zookeeper staff and the general public. The fourth lion cub, Tobias, was born earlier this spring to Tiberius and Lusaka’s half-sister, Lelei.

ROAR’s investment will support the Zoo’s promotional and conservation efforts, and most importantly, the institution’s participation in global conservation efforts. African lions, like Roary, are classified as vulnerable in the wild by the International Union for the Conservation of Nature (IUCN). The U.S. Fish & Wildlife Service takes a stronger stance, classifying the African lion as endangered. Loss of habitat and poaching are among the key causes of this classification. Every cub born and successfully reared will make a difference. ROAR Logistics is a proud partner in the Buffalo Zoo’s global conservation efforts, and is pleased to sponsor one of the institutions’ four new additions to the African lion population.