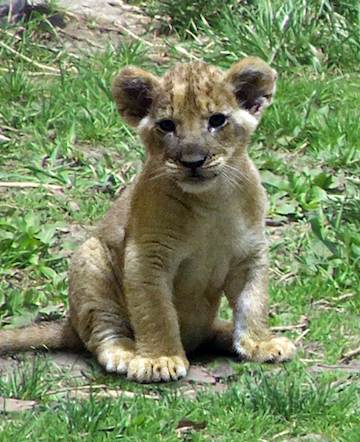 It’s all about the big cats at the Buffalo Zoo this week as it plans three cubs’ public debut, naming of the cubs, and the addition of a corporate sponsor.

This Saturday, Aug. 6, the zoo’s three newest lion cubs will join their big brother, Tobias, to make their official public debut when gates open at 10 a.m. The cubs, one male and two females, were born to first-time mother Lusaka and second-time father Tiberius on May 12.

The zoo is also welcoming ROAR Logistics to its family of corporate donors, with the company sponsoring both of its “Big Cats” exhibits: lions and tiger.

Company President Robert Rich III said, “ROAR Logistics is proud to sponsor the ‘Big Cat’ exhibit. We believe linking our name to these majestic cats brings attention to the zoo’s remarkable education and conservation efforts. By introducing these beautiful animals to new generations of zoo visitors, we hope to ensure that these animals not only thrive locally, but also in their natural habitats.”

ROAR is a leading supplier of supply chain solutions with its name being an acronym of the various services it offers: rail, ocean, air and road. More information is available at www.roarlogistics.com

Along with the public debut this weekend, the zoo will announce the names of each of the cubs.

In considering a methodology for their naming, Director of Marketing Todd Geise said, “It’s a bit of a unique situation to have three cubs to name all at once, and we wanted participation from many sources.”

As a result, the corporate sponsor will name the male cub as a courtesy of its generosity; the keeper staff will name one of the female cubs; and the general public will be able to weigh-in on three name choices for the remaining female through an online survey found on the zoo’s social media pages.

“Our visitors are important to us and we are committed to engaging them whenever possible. Like the gorilla baby naming earlier this year, this is yet another opportunity to involve the public,” Geise said.

All three names will be revealed at 11 a.m. Saturday at the lion exhibit.

African lions are classified as vulnerable in the wild by the International Union for the Conservation of Nature. The U.S. Fish & Wildlife Service classifies the African lion as threatened. Loss of habitat and poaching are among the key causes of this classification. Every cub born and successfully reared will make a difference.